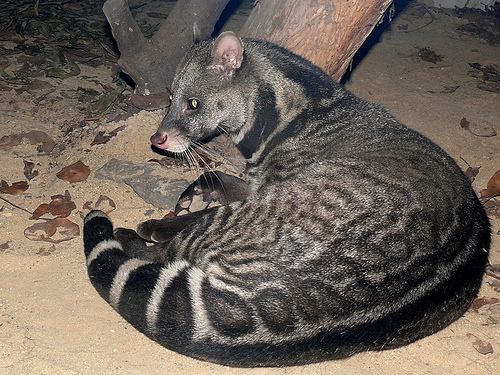 The world´s rarest civet is the Malabar large-spotted civet (Viverra civettina). Once a very common species and a major source of civet musk, today it is categorized by the IUCN as Critically Endangered. It is possible that less than 250 individuals still exist in the wild in South Malabar, southern India.

Although most civets resemble spotted, long-nosed cats, civets of the genus Viverra are the most dog-like in appearance, with long legs and rather canine heads and muzzles. Based on data for the large spotted civet, Viverra megaspila, which is closely related to the Malabar large spotted civet (and considered by some to be conspecific), it probably weighs 8 - 9 kg (18 - 20 lb).

The major threat facing isolated populations that have managed to survive in marginal habitats is changing cash crop practices and accidental hunting with dogs. They tend to be treated as raiders of poultry, and are captured and killed when encountered.

A continuing decline is inferred from the lack of any recent records and almost complete loss of habitat. What individuals remain are marginalized in sub-optimal habitat and any populations or reproductive individuals are severely fragmented and isolated. This species has a very restricted distribution and there is no recent evidence that it still exists within it protected areas.

The main threat to this species is the loss and degradation of forest habitat. Natural forests have completely disappeared in the entire stretch of the coastal Western Ghats.