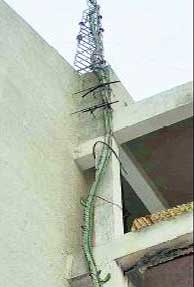 Known as `Cereus peruvianus’ in botanical terminology, the 78-foot plant is still growing. Planted on August 15, 2002, the plant belonging to Cactaceae family has no leaves. The stem is 3-9 degree angled with tuft of spines present on the ridges. It has flowers up to 20-cm long, funnel-shaped white in colour turning brownish when withered. The flowering season is from March to October, with maximum flowering in September.

The cactus has its origin in South America. In India, it is planted in hedges and is rarely cultivated. It is also called Hedge Cactus, Peruvian Apple, Peruvian Torch, Peruvian Tree Cactus, Apple Cactus and Column Cactus.

The flowers bloom during night and closes in the morning, and hence called night-blooming Cereus. The flowers are white when fully bloomed and copper coloured when closed. It has fruits called Peruvian Apple edible, red in colour. In Latin America, it is called Pitaya and marketed with the name Koubo. Good drainage, proper sunlight and low humidity are ideal conditions for cultivation.

Before it, the world record was in the name of another cactus in Narayanpur of Dharwad. It was 72 feet high when it entered into the records book in 2004.