From coins to notes: Amazing journey of Indian money

One of the earliest issuers of coins in the world, India has an illustrious history of coinage and currency notes.

The earliest payment instruments used in India were coins, which were either punch marked or cast in silver and copper.

'Punch Marked' coins were issued between the 7th-6th century BC and 1st century AD.

The princely states of India had their own distinct coins.

The earliest of dynastic coins came from the Indo-Greeks, the Saka-Pahlavas and the Kushans.

Then came coins made of copper and lead from the Satavahanas, who ruled Western-Deccan and Central India. These coins carried the motifs of animals and from nature.

Gupta coinage (4th-6th centuries AD) followed the tradition of the Kushans, depicting the king on the obverse and a deity on the reverse.

The earliest Gupta coins are attributed to Samudragupta, Chandragupta II and Kumaragupta and their coins often commemorate dynastic succession. 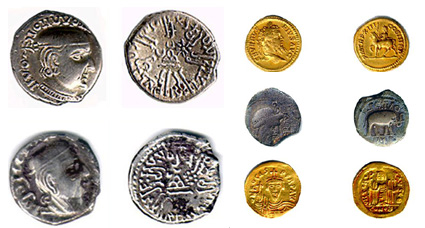 The symbols and motifs on South Indian coin issues were confined to dynastic crests such as the boar, bull, tiger, fish, bow, arrow and lion.

The first experiment was to make his coinage reflect the gold/silver price ratio prevailing in the free market, however, this attempt failed.

Then, old gold and silver coins of about 11 grams were reintroduced.

In the South, the Vijayanagar contemporaries of the Delhi Sultanate and Mughals had currencies set an example for a standardised issue.

This later provided a model for the European and English trading companies.

The most significant monetary contribution of the Mughals was to bring about uniformity and consolidation of the system of coinage throughout the Empire.

Sher Shah Suri (1540 to 1545 AD), an Afghan, who ruled for a brief time in Delhi issued a coin of silver which was termed the Rupiya. 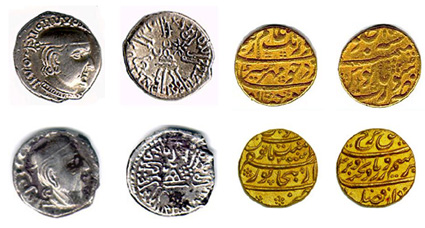 This weighed 178 grains and was the precursor of the modern rupee.

It remained largely unchanged till the early 20th Century.

Together with the silver Rupiya were issued gold coins called the Mohur weighing 169 grains and copper coins called Dam.

The Princely State of Hyderabad was founded around 1724. The coins of the Nizams were issued in the name of the Mughal Emperor till 1858. 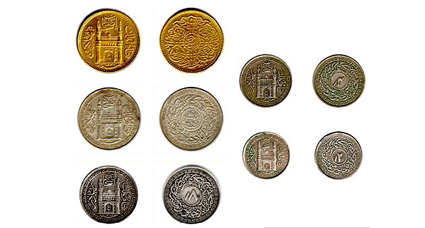 In 1903-04, coins were made with machines for the first time. These coins featured the Charminar on the obverse. These coins confirmed to the British coins in denominations and metals.

This represented the currency arrangements during the transition period upto the establishment of the Indian Republic.

The Monetary System remained unchanged at One Rupee consisting of 192 pies.

This series was introduced on 15th August, 1950 and represented the first coinage of Republic India.

The King's Portrait was replaced by the Lion Capital of the Ashoka Pillar.

A corn sheaf replaced the Tiger on the one Rupee coin. Indian motifs were incorporated on other coins. 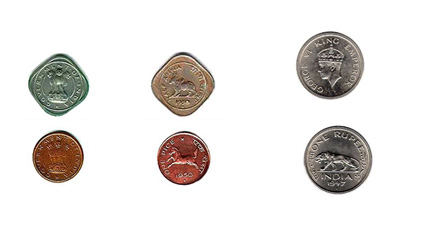 It was in September, 1955 that the Indian Coinage Act was amended for the country to adopt a metric system for coinage.

The rupee remained unchanged in value and nomenclature. It, however, was now divided into 100 'Paisa' instead of 16 Annas or 64 Pice.

For public recognition, the new decimal Paisa was termed 'Naya Paisa' till 1st June, 1964 when the term 'Naya' was dropped. 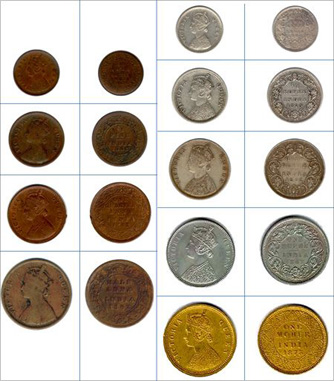 Over a period of time, cost benefit considerations led to the gradual discontinuance of 1, 2 and 3 paise coins in the seventies.

The very considerable costs of managing note issues of Re 1, Rs 2, and Rs 5 led to the gradual coinisation of these denominations in the 1990s.

Paper money, in the modern sense, has its origin in the late 18th century with the note issues of private banks as well as semi-government banks.

In 1835, the East India Company introduced the Company's Rupee to bring about uniformity of coinage over British India.

Amongst the earliest issues were those by the Bank of Hindoostan, the General Bank in Bengal and Behar, and the Bengal Bank. 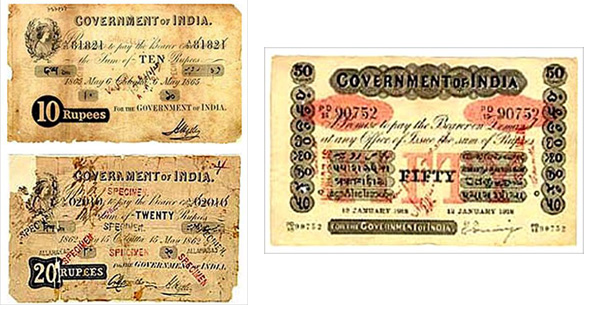 Later, with the establishment of three Presidency Banks, the job of issuing notes was taken over by them.

Each Presidency Bank had the right to issue notes within certain limits. The Bank of Bengal notes generally circulated within Calcutta, were mainly used for effecting large transactions.

The largest proportion of the Bank of Bengal notes consisted of notes of Rs 100 and upwards.

The Bank of Bengal had notes in 3 series: the 'Unifaced' Series, the 'Commerce' Series and the 'Britannia' Series.

The notes of the Bank of Madras bore the vignette of Sir Thomas Munroe, Governor of Madras (1817-1827).

The other private banks which issued bank notes were the Orient Bank Corporation established in Bombay as the Bank of Western India in 1842. Its notes featured the Bombay Town Hall as vignette.

The Commercial Bank of India established in 1845 in Bombay (also an Exchange Bank) issued exotic notes with an interblend of Western and Eastern Motifs.

The Paper Currency Act of 1861 conferred upon the Government of India the monopoly of Note Issue bringing to an end note issues of private and Presidency Banks.

These were unifaced, carried two language panels and were printed on hand-moulded paper manufactured at the Laverstock Paper Mills (Portals).

The security features incorporated the watermark (Government of India, rupees, two signatures and wavy lines), the printed signature and the registration of the notes.

British India Notes facilitated inter-spatial transfer of funds. As a security precaution, notes were cut in half.

One set was sent by post. On confirmation of receipt, the other half was despatched.

The Victoria Portrait series was withdrawn in the wake of a spate of forgeries and replaced by the unifaced 'Underprint Series' which were introduced in 1867.

The Underprint Series notes were printed on moulded paper and carried 4 language panels (Green Series). The languages differed as per the currency circle of Issue.

Language panels were increased to 8 in the Red Series.

The improved security features included a wavy line watermark, the manufacturer's code in the watermark (the source of much confusion in dating), guilloche patterns and a coloured underprint.

This series remained largely unchanged till the introduction of the 'King's Portrait' series which commenced in 1923.

Compulsions of the first World War led to the introduction of paper currency of small denominations.

Rupee One was introduced on 30th November, 1917 followed by the exotic Rupees Two and Annas Eight.

The issuance of these notes was discontinued on 1st January, 1926 on cost benefit considerations.

These notes first carried the portrait of King George V and were the precursors of the 'King's Portrait' Series which were to follow.

Regular issues of this Series carrying the portrait of George V were introduced in May, 1923 on a Ten Rupee Note.

The King's Portrait Motif continued as an integral feature of all Paper Money issues of British India.

The government of India continued to issue currency notes till 1935 when the Reserve Bank of India took over the functions of the Controller of Currency.

With the establishment of the Currency Note Press at Nasik in 1928, currency notes came to be progressively printed in India.

By 1932 the Nasik Press was printing the entire spectrum of India currency notes. The improved security features were changed watermarks, intricate portrait designs and multicoloured printing.

The Reserve Bank of India was formally inaugurated on Monday, April 1, 1935 with its Central Office at Calcutta.

The George VI series continued till 1947 and thereafter as a frozen series till 1950 when post independence notes were issued.

After independence, the government of India brought out the new design Re 1 note in 1949.

Symbols for independent India had to be chosen. At the outset it was felt that the King's portrait be replaced by a portrait of Mahatma Gandhi.

The consensus moved to the choice of the Lion Capital at Sarnath in lieu of the Gandhi Portrait. The new design of notes were largely along earlier lines.

In 1953, Hindi was displayed prominently on the new notes. The debate regarding the Hindi plural of Rupaya was settled in favour of Rupiye.

During the early sixties, the sizes of notes were reduced. In 1969, a commemorative design series in honour of the birth centenary celebrations of Mahatma Gandhi was issued depicting a seated Gandhi with the Sevagram Ashram as the backdrop.

Cost benefit considerations prompted the Bank to introduce Rs 20 denomination notes in 1972 and Rs 50 in 1975.

The 1980s saw a completely new set of notes issued. The motifs on these notes marked a departure form the earlier motifs.

The emphasis lay on symbols of Science & Technology (Aryabhatta on the Rs 2 note), Progress (the Oil Rig on Re 1 and Farm Mechanisation on Rs 5) and a change in orientation to Indian Art forms on the Rs 20 and the Rs 10 notes. (Konark Wheel, Peacock). 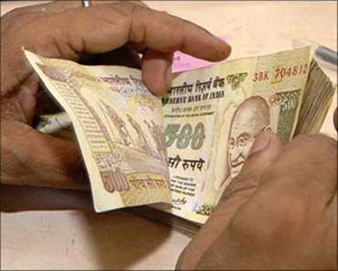 The Rupee 500 note was introduced in October 1987 with the portrait of Mahatma Gandhi. The water mark continued to be the Lion Capital, Ashoka Pillar.

With the advancement of reprographic techniques, it was necessary to introduce new features and a new 'Mahatma Gandhi Series' was introduced in 1996.

A changed watermark, windowed security thread, latent image and intaglio features for the visually handicapped are amongst the new features.