A New Yorker writes about a slum in Mumbai

Beyond The Beautiful Forevers provides a fascinating and horrifying glimpse into a world that is rarely written about.

A report on a New York event to promote Katherine Boo's much-acclaimed book about a slum in Mumbai.

In Annawadi, a slum bordering Mumbai's airport, where life is cheap, respect hard to find and survival the only prize, Katherine Boo appeared as an unlikely crusader.

Boo -- a Pultizer Prize-winning reporter who has worked at The Washington Post and now writes for The New Yorker --overcame her own ignorance of the languages and the culture that defined the people who live in Annawadi, her crippling arthritis and other illnesses, and battled prejudice to slowly collect the material that became a book, Behind The Beautiful Forevers.

'Beautiful Forevers' refers to the ads on the Mumbai airport wall for Italianate tiles.

At an evening reading at a Barnes and Noble store on the Upper West Side of Manhattan, New York City, Boo looked small and frail as she used both her gnarled hands to hold up a Starbucks coffee cup. 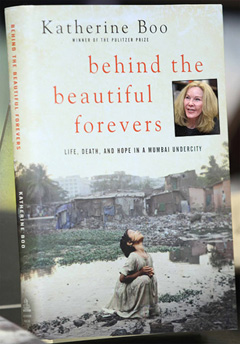 Katherine Boo's book uses the tale of Abdul -- whose family suffers when, after a fight with them, the lame woman next door in the Annnawadi slum sets herself ablaze -- to tell a larger story.

Hounded by the police, social workers and local politicians all trying to make money off them, Abdul's family is finally driven out of business. But Abdul and his family are only symptoms of a larger malaise as Boo uses an effective mix of reportage and writing to describe the desperate lives of the people of Annawadi.

Boo has a way of squeezing facts into modifiers, often hyphenated: 'People-choked slumlanes, switchy-hipped (of Fatima, the woman who set fire to herself), work-hunched and wiry (of Abdul), that grave, unblinking eye in a burn-mapped face (of an infant who survived after his father, bankrupted by his illness, poured boiling lentils on him)...' 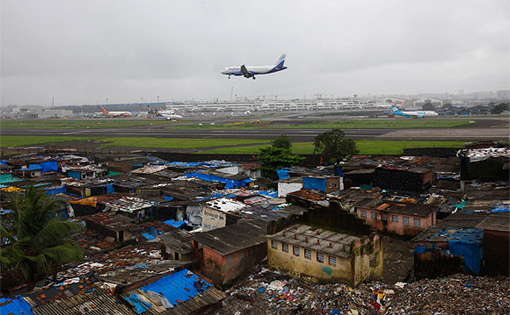 For the most part, Katherine Boo relies on assiduously collected facts to describe the world she visited, but could never really be a part of.

For a while, she rented a place from a security guard, but vacated it when she found out he had also sold it to a family.

Thanks to what appears to be obsessive interviewing, Boo could also read into the locals' motivations.

This is her description of a local slumlord who exploits people and is, in turn, exploited by the policemen and politicians she relies on:

'Asha had... seen beyond the obvious truth -- that Mumbai was a hive of hope and ambition -- to a profitable corollary: Mumbai was a place of festering grievance and ambient envy. Wealthy citizens accused the slumdwellers of making the city filthy and unliveable even as an oversupply of human capital kept the wages of their maids and chauffeurs low. Slumdwellers complained about the obstacles the powerful erected to prevent them sharing the... profit. Everyone everywhere complained about their neighbours. But in the 21st century city fewer lower-income people joined up to take their disputes to the streets. As group identities based on caste, ethnicity and religion gradually attenuated, anger and hope were being privatised like so much else in Mumbai.' 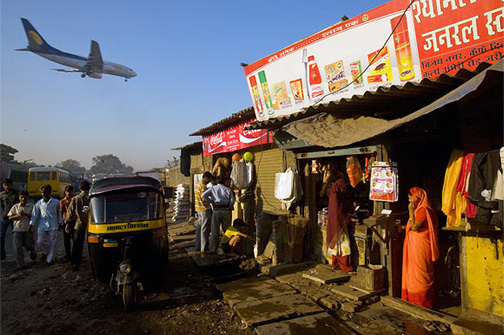 Speaking at the Barnes & Nobel event in Manhattan, Katherine Boo -- who won the prestigious MacArthur 'Genius' Fellowship in 2002 -- says, "I was in Mumbai, which is a city that is manifestly prospering, and yet 60 percent of the citizens lived in the slums.

I found myself asking questions not unlike the ones that I've asked in my own country -- which is, whose capabilities get supported in this society and whose gets squandered? What's the infrastructure of opportunity here? Who gets out of poverty and who doesn't -- and why?"

She described her reporting style as a vagrant blend of immersion and investigative document-based reporting.

"It seemed to me that the effects of social inequality and market globalisation were among the most over-theorised and under-reported of our time. My hope in what I've written is to make a small contribution to that imbalance between reporting and theory." 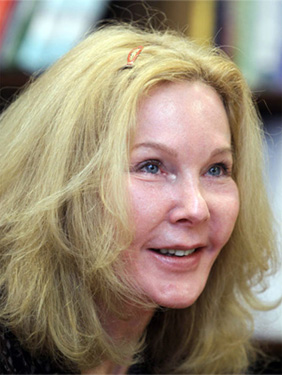 While Katherine Boo's work provides a fascinating and horrifying glimpse into a world that even hard-bitten local reporters think twice about exploring, the book goes beyond mere story, telling of the dehumanisation of the have-nots in a world obsessed with power, position, possessions... and money.

It does not appear to be an age Katherine Boo is comfortable with.